Greatest In Demand RPA Tools in 2022 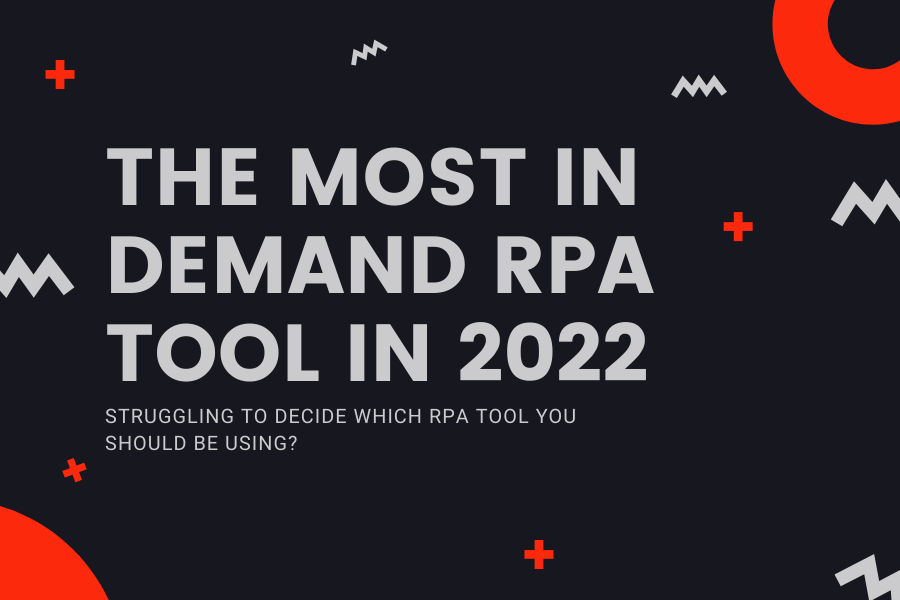 RPA stands for Robotic Process Automation, and is a subset of the ‘automation umbrella’. This area of automation focuses entirely on the automation of business processes. In short, RPA is the area of automation which eliminates those repetitive tasks which nobody enjoys doing. From a business management perspective, it increases efficiencies, reduces errors, and in many cases will increase employee morale.

RPA is a bit of a blanket term, and can utilise a variety of technologies. This can include Machine Learning (ML), Artificial Intelligence (AI) and more. All of these technologies are used in order to improve the way we can automate repetitive and mundane processes within a business.

The overall aim of RPA is to have a large impact upon operational efficiency within a company.

We speak often about the general public fear surrounding anything with the ‘automation’ label. However, as we’ve seen quite a lot in the past couple of years, there has been a massive surge in the demand for a new type of worker. An RPA engineer. Businesses are eager to find people who are able to manage and implement these technologies into their businesses.

Businesses which have a heavy focus on repetitive tasks can gain a very quick ROI through the implementation of RPA. Think of processes such as the automation of processing and approving invoices, or repeatedly entering data into spreadsheets. These are the types of tasks in which an RPA engineer would be able to relatively quickly create improvements for the business.

When compared to many other business solutions, RPA is actually quite simplistic to implement. It requires very little major change to the company, and once an engineer has created the process within an RPA tool, it is almost a “plug in and play” setup. Managers can think of it as re-delegating repetitive tasks to a robot, which will allow their human employees to thrive in an area which requires more human focus.

The Core Benefits of RPA

There is the obvious benefit that RPA brings, and that is cost savings. Time is money, and if you can reduce the workload for the team by 10 hours per week, that will compound to a very significant annual saving for the company. However, there are other less obvious benefits as well.

Process and worker productivity will increase with the implementation of RPA. It enables businesses to really optimize and improve processes, and utilize their employees in a more productive manner.

Employees who were previously executing these manual tasks will be free to work on other tasks which may produce more return for the company. At the end of the day, the work needs to be done, but if it can be automated, why not free your employees of that burden, and let them focus on more invigorating work?

And what happens when staff feel more excitement and enjoyment from their role? Productivity goes up, and so does…

Repetition and a lack of autonomy is a surefire way to kill employee morale, productivity and creativity. Automation is often viewed as the enemy in the eyes of employees. However, the actual reality is that it can be a boon to their enjoyment within their career. Studies show that autonomy is one of the key drivers to employee satisfaction in their career. By eliminating the tasks which they “have to do” on a daily basis, it allows them to fill their role with more autonomy and work on more ad-hoc interesting projects.

Humans make errors. Hence the term “human error”. RPA does not make errors, assuming all the variables that it has been told to do are as expected. A robot in an RPA setup with perform a task exactly as told, without fail. It doesn’t take breaks. It doesn’t get distracted. It doesn’t have family issues, or stress. There are a myriad of outside sources which can impact the performance of a human on a daily basis. These factors do not come into the equation for RPA.

In today’s business environment, a small error could cost a company millions. Therefore, if a process which is essential can be automated with more reliability, it seems like a no brainer that it should use RPA.

There is only one way an RPA setup can make errors, and rather ironically, that is if the human who set it up made an error. Therefore, the only way an RPA error occurs, is through human error. However, assuming everything has been set up correctly, robots will complete tasks with absolute perfect certainty every single time.

In the same way that brick and mortar stores were left in the dust if they didn’t create an online store as well, businesses not utilising automation will also be left behind in the future. By accepting automation and implementing it into your arsenal of business tools, you will leapfrog over the competition who are not using it.

RPA can complete tasks faster and more reliably than any human. Therefore, if there are two businesses who are competitors, and they both have 20 members of staff. Company A also has an RPA setup which is running data and reporting overnight while everyone sleeps. It is clear which company has the competitive advantage here.

Automation can run in the background while staff work their normal roles. It can also run overnight, while nobody is working.

A study by McKinsey showed that 45% of activities at work could/should already be automated using RPA technology.

The following tools on the list might not be categorised as core-RPA tools. They’re a little more simplified, and for the mass market. Fundamentally, they automate workflows, but an RPA tool such as UiPath will take a much larger scale approach. The following tools may be beneficial for those wishing to dip their toes into RPA, or those who work in a smaller company which does not require the large scale operational benefits of the aforementioned tools.

PowerAutomate is a Microsoft solution, which was formerly known as Microsoft Flow. This is included within the Microsoft 365 suite of tools, and therefore is arguably the most accessible tool on this list.

Fundamentally PowerAutomate is a great tool for linking apps together. Whether that be linking Outlook and Excel, or Google Calendar and Twitter.

Some examples of Power Automate processes:

PowerAutomate is based on a ‘trigger’ framework. You set a trigger point, and then when that is triggered, Power Automate will proceed to complete a series of predetermined tasks.

Integromat is similar to Power Automate and Zapier. They are all at their core “drag and drop” solutions for RPA/Workflow Automation. This means that they are all somewhat more accessible and easy to learn than the larger players within the RPA space.

Integromat focus on their functionality of moving data between apps without too much effort, and it has quite an intuitive workflow visual in order to simplify the setup process.

Zapier provides the largest number of integrations of the three options mentioned here. It is therefore arguably the best if you have a wide variety of non-Microsoft apps to link together. For example, if you wish to link your CRM to Google Calendar, then Zapier might provide a little bit of a more plug and play approach than the others.

Zapier vs Integromat vs Power Automate

It is arguably not fair to compare the last three offerings on this list, so we will compare them by themselves briefly.

The main difference between them is that Power Automate is a Microsoft system, and therefore does not run on Linux systems (however, it does work on Mac). Conversely Zapier and Integromat are SaaS style businesses, and therefore everything is set up within their cloud based setup. This means they work on every platform.

From a support basis, Zapier and Integromat are superior, and far easier to get in contact with than Microsoft.

This conclusion can probably be summed up as follows: If you want to automate a lot of Microsoft tools (excel, outlook etc) then go with Power Automate. If you wish to go for a cost effective option, then Integromat is what you’re looking for. Then, if you want ultimate versatility and use many different apps and require a large number of integrations, then Zapier is your weapon of choice.

This shift into the realm of automation will cause an increase of productivity, a reduction in human error, and an increase in human autonomy which will improve team morale.

By putting RPA into your core function, you will make your business work faster, more efficiently, and put yourself at the forefront for future development in technology. Ultimately pipping your competitors to the post.